We do the things we do and feel what we feel essentially because we must—we are responsible for our actions, but we rarely understand them. It goes without saying, I believe, that if we understood ourselves better, we would damage ourselves less. But the barrier between oneself and one’s knowledge of oneself is high indeed.

Over the past seven weeks we have been reading writers who are preoccupied with the question of democracy. There are many stories embedded in this literary and cultural history, of course, and our reading list has been built around writers dedicated to the open-ended, and imperfect, process of democratic culture: of the struggle to enact the democratic ideals of egalitarianism and pluralism.

Our story began with “Literary Characteristics of Democratic Times,” a chapter from the second volume of Democracy in America, in which Alexis de Tocqueville argues that the exclusive literary culture in American democracy appears to value literature with a practical use.

The writing of the political scientist Robert Dahl offered insight into the tensions and paradoxes of these democratic ideals. At the same time, we discovered that Emerson and Whitman were engaged with questions posed by historians, philosophers, and theorists of democracy. That is, their literary work is dedicated to not only realizing the possibilities of democratic literature but to thinking about the problem of defining, building, and sustaining a democratic culture. 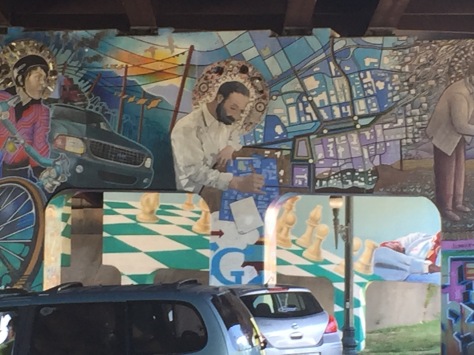 The process of democratic culture is what John Dewey called “creative democracy,” a provisional, open-ended, and imperfect process that make possible communal decisions while giving equal consideration to individuals. Dewey’s cultural contributions are difficult to measure in a general survey. However, his critical optimism, and utopian pragmatism, furthered our story of democratic ideas and ideals, on the one hand, and the less lofty social realities of lived experience in the United States, on the other.

In tracing the story of the artist’s reception of and engagement with democratic thinking we considered two case studies. The first case is the institutional ritual and the cultural occasion of commencement. We read commencements by Ralph Waldo Emerson at Harvard, “The American Scholar” (1837), Adrienne Rich at New Jersey’s Douglass College “Claiming an Education” (1977), and Terry Tempest Williams’ commencement at the University of Utah, “The Open Space of Democracy” (2003). The second case was poetic theory and practice. We read Claude McKay, “America” (1921), Langston Hughes, “Let America Be America Again” (1936), Alan Ginsberg, “America” (1956), and Naomi Shihab Nye “United” (2016).

We turned our attention to the singular project of Adrienne Rich. We read two essays— “Blood, Bread, And Poetry: The Location of a Poet” and “Notes Toward a Politics of Location”—from Blood, Bread, and Poetry: Selected Prose: 1979-1985 (1986) and her collection of poems in An Atlas of the Difficult World: Poems 1988-1991.

And we moved from the practice of poetry to the experience of art, and the role of the artist. We read “Having an Experience” from Dewey’s Art as Experience (1934) and his essays “Creative Democracy” (1939), originally delivered by Horace Kallen and published in the Promise of America (1939), and “Democracy is Radical” (1936). We also looked at a cultural commentary less sanguine about Dewey’s participatory aesthetic, “The World Outside And The Pictures In Our Heads,” from Walter Lippman’s influential study Public Opinion (1922). Finally, we considered a definition and defense of the role of the artist in a democracy, James Baldwin’s 1962 address “The Artist’s Struggle for Integrity” and his essay “The Creative Process.”

A history of writers engaged with the question of democracy, as this sequence of reading is designed to suggest, is at the same time enacting democratic thought. It is a history of writing as inquiry, as an investigation through words—or even an “interrogation,” to borrow words from a writer who some of you already know, Ta-Nehisi Coates—of drawing us into consciousness. Here is how James Baldwin names this interrogation in the essay we read together last week, “The Creative Process”:

This continent now is conquered, but our habits and our fears remain. And, in the same way that to become a social human being one modifies and suppresses and, ultimately, without great courage, lies to oneself about all one’s interior, uncharted chaos, so have we, as a nation, modified or suppressed and lied about all the darker forces in our history. We know, in the case of the person, that whoever cannot tell himself the truth about his past is trapped in it, is immobilized in the prison of his undiscovered self. This is also true of nations. We know how a person, in such a paralysis, is unable to assess either his weaknesses or his strengths, and how frequently indeed he mistakes the one for the other.

From James Baldwin and Adrienne Rich we can move to a more recent engagement with these questions, the work of Ta-Nehisi Coates. In his 2015 Between The World and Me Coates unravels his own discovery of reading and writing. Coates writes, “The pursuit of knowing was freedom for me, the right to declare your own curiosities and follow them through with all manner of books” (48). The poets he was reading in college were moving him from something like what Rich called in Atlas “the burnt out dream of innocence.” Coates tells of the moment when these writings became, for him, “notes on how to write, and thus notes on how to think.”

And he goes on, describing the consequences of not thinking, of abandoning the creative process, of “living the Dream”:

The Dream thrives on generalization, on limiting the number of possible questions, on privileging immediate answers. The Dream is the enemy of all art, courageous thinking, and honest writing” (50).

We will keep these words in mind as we turn our attention to the Keene State College Social Justice Collection and our studies to the literary and cultural work of Aspect magazine . You might also keep these words in mind as you continue to use your writing to think for yourself-as you continue to (re)claim your education, to take responsibility for what you are feeling, thinking, and doing.

After all, this is one of the responsibilities we talked about with Adrienne Rich. “Responsibility to yourself,” Rich writes, “means refusing to let others do your thinking, talking, and naming for you; it means learning to respect and use your own brains and instincts; hence, grappling with hard work.”

"Democracy depends on engagement, a firsthand accounting of what one sees, what one feels, and what one thinks, followed by the artful practice of expressing the truth of our times through our own talents, gifts and vocations" -Terry Tempest Williams, The Open Space of Democracy